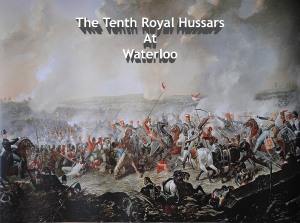 Help with other material, information and pictures has been generously provided by The Horsepower Museum, Winchester, and their aid in providing photographs of paintings of the battle which are housed at the Museum is very gratefully acknowledged. I am also indebted to members of the Napoleonic Wars Forum for their help and advice with additional material.